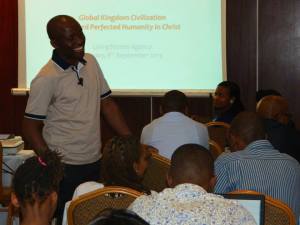 This Global Kingdom Civilization (or Kingdom Humanity) Ratification and Declaration was administered by the Church Community of LivingStones Agency (LSA) in the City of Durban (South Africa), on Sunday 8th September 2013, under the leadership of Robert Ntuli. The Ratification was declared, as an act of obedience to the instruction of the Holy Spirit. The Lord instructed us to ratify that which He had revealed. New Purposes of God must be Prophesied and Ratified by man in the Earth.

To Ratify is to give formal approval and consent to something; it is to confirm and agree on something.

To Ratify is to confirm and agree with the Purposes of God arriving in the Earth. God is Sovereign but He will do nothing unless He reveals His secret plans to His servants the Prophets (Amos 3:7). The Sovereign Lord has chosen to work through Divine Partnership with man. The job of the Prophets is to discern, confirm, agree and proclaim the Plans of God in the Earth. In this context, Ratification is a Prophetic function.

2 Corinthians 1:20 For no matter how many promises God has made, they are “Yes” in Christ. And so through him the “Amen” is spoken by us to the glory of God.

Psalms 68:11 The Lord announced the word, and great was the company of those who proclaimed it. NIV

Moses stood before the people and Proclaimed the Covenant and People responded with an “Amen” (Ex 24:7). Ezra stood before the People and read the Law of God and People responded with repentance and agreement (Neh 8:1-12). Peter and the Early Believers ratified the birthing of the Church in Jerusalem with a Powerful Proclamation (Acts 2:1-4&14-16). All this means that significant Movements and Shifts in the Spirit always require a Prophetic People to arise and ratify the New Purposes of God arriving in the Earth.

In the Spirit realm, things move by Proclamation. In the beginning, God declared things into existence (Gen 1:3). Abraham – the Father of our faith believed in the God of Creative Proclamation (Rom 4:17). Reality is established by Proclamation (Heb 11:3). The End of Time is facilitated by a Series of Angelic-Prophetic Proclamations (Rev 8:2).

Read this Ratification Declaration and join in the powerful Proclamation of the establishment of Church as a Global Kingdom Civilization in the Earth. 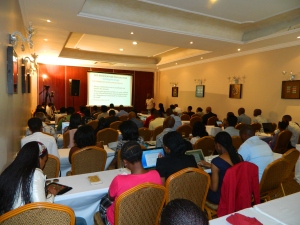 Lord, this sacred Assembly is an outcome of a Divine Process that has been brewing in our hearts since the primitive phases of our Journey. You brought us forth as a Community through powerful Apostolic Proclamation and revealed your Kingdom to us. You started our Journey through Apostolic Grace. You connected us to Brothers and Sisters across the Nations of the World – people of same values, emphasis and pursuit.

Our Journey connects to the beloved Body of Christ that you are actively building unto Perfection – Believers of all Races, Culture and Gender across the Nations of the World, who have been touched by the power of your saving grace and the Holy Spirit.

Our Journey is connected to the lives of the Patriarchs, Kings, Priests, Prophets, Apostles and all the Holy Saints who fought the Darkness by the Light of their lives and ensured the advancement of your Kingdom.

Our Journey is connected to those you will touch from now onwards and bring to the Revelation of your Lordship and Kingdom, those yet to be born and those already in the Earth – who are chained by the Darkness, waiting for the Day of Redemption.

We therefore stand in your Presence Oh Lord, as a Representation of the Advancement of the Purpose of God in the Body of Christ.

Father, you came and revealed your Son to us as a Civilian – a Kingdom Citizen – the Last Adam. You revealed your Son – as the Pattern of our Humanity, Human Existence and Citizenship in the Earth. You revealed to us that this Civil Dimension of Christ is the main characteristic and thrust of the Spirit of God towards the Church and the Earth in this Hour. This is the main thing that must now be built in the Church.

You showed us that Adam is the First Block and the First Image in the Structure of your Word – the Genesis of all things – and therefore the First Block and Image in the Structure of your Mind. We therefore saw that Christ, the Last Adam, is the Doctrinal Emphasis and the Building Platform of this New Season. Through Adam, we saw that Human and Civil Development is the foremost thought in the Mind of God and becomes the main focus of the Church in this New Season.

You revealed to us that Human and Civil Development, and not Ceremonialism, is the Framework of Scripture – and that the Word of God is our Alpha System, the starting place of our thought process and perspective.

You revealed to us that the Kingdom of God is moving and establishing itself within the Civil Dimension of Human Life and that Church is assuming a Strong Civil Dimension in the midst of the Nations of the World.

You spoke to us about Global Kingdom Civilization, the defining structure of Church and Human Life in this New Season. We have seen Zion – the City that was revealed to our forefathers Abraham, Ezekiel and John. We have seen that which many Prophets and Righteous Men longed to see in the former days.

In your Sovereignty, you led us through divine orchestration. You moved ahead of us and Set the Stage in the Spirit. You led us to the reality of Kingdom Purpose arriving in the Earth.

Global Kingdom Civilization, come forth and be established in the Earth!

Come forth and be established in the structures of Church!

Come forth and be established in the Structures of Man!

Move and touch the Nations of the North, South, East and West.

Be established in the Villages and Suburbs.

Move in the Shacks and in the Pent Houses.

Touch the Educated and the Uneducated; the Rich and the Poor.

Be established across the Races and Cultures of Man.

Move in Africa, Asia, South America, Europe, Oceania, North America and in all the Islands of the Sea.

Touch the Systems of Politics, Governance and Commerce.

We stand here and proclaim the Righteousness of the Lord in Zion. We announce it and proclaim it among the Nations. We lift the Banner in the Heavens. We declare that Global Kingdom Civilization is now the New Dimension of the Spirit and of the Life of Christ that defines the core Reality of Church and Human Life in the Earth.

God, we now petition you – to reconfigure your interaction with the Church. Release new Grace and Impartation, unheard of in former times.

Break the shackles of Darkness and Religion and bring “Judah” to the Altar. We call forth a new Priesthood in the Church.

Global Kingdom Civilization – come forth and establish yourself above the hills! Let all Nations stream towards you, Oh Zion.

God, we believe with our hearts and make this confession with our mouths. Now let the redemption of God begin to touch Man across the Nations of the Earth.

Release your Grace and make us Builders of this Global Kingdom Civilization. Sustain us by your Breath in your Purposes until we finish building all that is in your Mind. Surround us by your Presence and Angelic Power and make us faithful Stewards of your Word as we advance your Purposes. Cause us to increase by the thousands across the earth and cause our Offspring to possess the Gates of the Enemy.

Now God, that which we Ratify becomes Law! It cannot be cancelled, overturned, nullified or vetoed by any system of Authority – whether thrones in the Heavens or on Earth.

Now loose it God, in Heaven. Loose the New Architecture and the New Child.

We, the People of Christ – the People of the Kingdom – broadcast this new Global Kingdom Civilization before Rulers and Authorities in the Heavenly Realms. We announce it in the Earth. We make this proclamation together:

We declare that this is now so, in the name of our Lord Jesus Christ, Amen!

Let the Heavens Rejoice! Let the Earth sing praises to the Lord! Let the Saints rejoice, for the Redemption of our Lord has come!